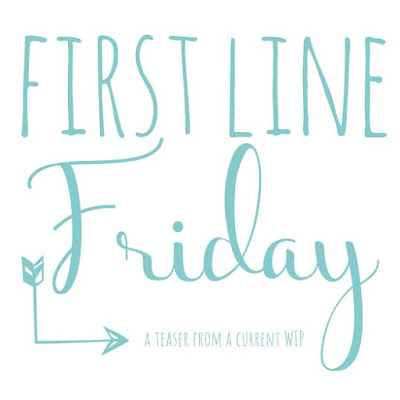 Hello!
Long time no blog, but some of my writer girls have cooked up a meme to help out with that.
It's called
First Line Friday.

The idea is we'll all share (unedited) snippets from one of our current Works In Progress.

“What’s your name?” he asked her gently, needing to keep her focused and lucid. “Can you tell me what happened?”
“Skye. That was KC and my driver was…” A sob erupted from her as she crumpled.
Scott caught her and gently lowered her down to a sitting position on the ground.
“My driver was Roger. Oh God, I need to call his daughter, Cynthia.”
Listening to her lungs with his stethoscope, he tried to get her calmed down, talking to her. “Where were you all traveling?”
“We left Austin earlier today and were headed up to Oklahoma. Norman, Oklahoma. Home. I should have let Roger go on and KC and I could have flown. It’s what KC wanted to do. Why didn’t I do that? Oh God, this is all my fault.”
“Shh, it’s okay. Calm down. Working yourself up right now won’t do anyone any good. Why were you in Austin?” He needed to distract her.
“My label wants a new contract so we were trying to negotiate that.” She chuckled harshly. “Not that that did us any good. Those bastards are trying to take advantage of me.”
He stilled. “Wait a minute.” He cleaned some of the blood off her face, trying to see how bad the head wound was, but also trying to see her pale face by the light of his flashlight. Then the name she’d said clicked. “You’re Skye Taylor, aren’t you? I was just listening to you on the radio.”
She nodded her head and then closed her eyes with a pain-filled grimace. “Yeah,” she whispered, suddenly paling even more. She tilted to the side.
“Whoa,” he said as he steadied her with a grasp to her side. “Tell me what’s happening?”
“Dizzy.” She swallowed hard and began breathing a bit heavier. “Feeling a bit sick.”
He flashed his flashlight to check the reaction of her pupils as he talked. “Okay, throw up if you need to. Just try to miss me, okay?”
She glared at him and he chuckled. Even after everything that had happened she still had some sass in her. He liked that.
He lifted the end of his stethoscope. “I’m gonna use this to listen to your chest.” Everything sounded clear, but she was breathing really shallowly. “I know your head and your arm hurt. What else hurts?”
“Ribs on the right side.”
That was where she held her injured arm so he hadn’t explored the area too much. “Okay, let me check them real quick and make sure you don’t have something else going on.”
He started pressing his fingers along her side, brushing the underside of her breast.
“Wow, look at you,” she murmured on a gasp of pain. “You made it to second base and I don’t even know your name.”
“Scott. Scott Martin,” he said and smiled up at her.

***
(This book will be out sometime around the first or second week of September...depending on edits.)

AND there will be a new cover reveal sometime next week, so keep an eye on this space.
***

Here's the Goodreads link to the book
(note: this is an old cover design, but the book has never been released...I just jumped the gun on posting the cover a couple of years ago.)

Email ThisBlogThis!Share to TwitterShare to FacebookShare to Pinterest
Labels: Coming Soon, excerpt, First Line Friday, Right by Your Side