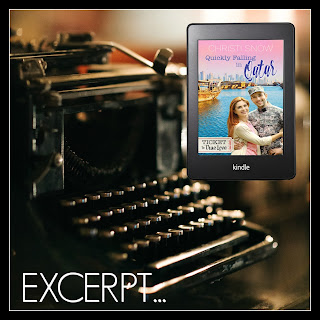 
He let the valet take the car after he grabbed his overnight bag out of the backseat, then he entered the very upscale, modern, high-rise hotel. The swanky, marble-filled lobby bustled with various clusters of people standing around chatting and doing their business. He scanned the area, but didn’t see anyone immediately who struck him as the person who’d be filling the role of his fiancée.
The agents hadn’t told him what to do in that instance. Maybe whoever he was meeting had left him a note at check-in. He approached the long desk and smiled at the concierge standing there waiting to help.
But before he made it, he heard his name. “Mal?”
He knew that voice.
His breath froze in his chest.
It couldn’t be.
He turned toward the person.
His knees wobbled even as his heart rate took off like he was on the verge of having a heart attack.
Hell, maybe he was.
“Petra?” he asked, his voice hardly more than a whisper of shock.
He hadn’t seen her in nine years, but she looked exactly the same...just more stunningly beautiful. He wouldn’t have thought that was possible.
Petra Compton.
The only woman he’d ever loved.
The woman who’d broken his heart and never looked back.
She was looking at him now though, gauging his reaction.
He didn’t know how to react. How had this happened?
She couldn’t be his contact. Life couldn’t be that cruel. But why was she here?
She wore a slim-fitting black pantsuit with red, mile high heels. The heels gave her an inch or two on his height since she was tall for a woman at five foot nine. In college, she’d always dressed casually and used very little makeup. That wasn’t the version of Petra standing in front of him today. Her long red hair was pulled back into a tight bun on the back of her head, and she’d done her makeup to perfection.
She looked like a high price model and he wasn’t the only one who thought so as heads across the lobby turned to watch her elegant approach.
When she reached him, she leaned forward to embrace him. Her lips brushed over his ear, leaving goosebumps trailing down his spine. “Play along,” she whispered.
Then she pulled back as she kissed his cheek. “Hello, darling,” she said exuberantly, using her normal voice that carried over the marble-floored lobby. “I’ve missed you.”
Up close, she smelled exactly the same as he remembered, honeysuckles in the morning. That scent hit him like a deathblow. Oh, god. He’d missed her so much.
His arms tightened around her instinctually. “Petra.” His voice didn’t even sound like his own.
He pulled away, needing separation from her. He had to get his brain to function and he couldn’t do that with her so close.
For a split second, her eyes flashed with worry at whatever she could read on his face.
He worked to school his expression. He couldn’t blow this operation when it had barely even begun, no matter much her being here shocked him.
She hooked her arm in his and gently tugged him toward the back of the lobby. “Did you have any problems finding the hotel? Wait until you see our suite. It’s just gorgeous. I’m so glad you could get the time off. We’re going to have an amazing visit.” She continued to gush like any normal almost-married couple would.
He just nodded along. That was the extent of his acting ability right here, while his heart and mind both reeled. Nine years ago, they’d fought, and she’d left. No goodbye, no fuck you, no nothing. One day she was there, the next she’d left, and he felt like she’d ripped his heart from his chest.
Hell, it kind of felt the same way right now. Guess somewhere along the line, his heart had healed...just so she could come back and pummel it again.
He followed her into the elevator that he assumed led up to their room, like a lamb being led to slaughter.
When they entered the elevator, she squeezed his hand and glanced meaningfully up at the camera in the corner, like he was a novice at this. He knew the camera was there, although now when the anger was pulsing under the thin layer of his skin, he wasn’t sure how much he really cared.
How dare she show up like this out of the blue?
It didn’t matter that this was their job.
It didn’t matter that a twenty-five-year-old lieutenant was missing.
It didn’t matter if the fucking President himself had sent Petra to be here.
It should matter how much she knew this would hurt him.
How could she come here like this and act like it was no big thing?
Posted by Christi at 12:37 PM No comments:
Email ThisBlogThis!Share to TwitterShare to FacebookShare to Pinterest
Labels: Locating Love Series, New Release, Quickly Falling in Qatar, Ticket to True Love