It's a holiday sale!

Here in the US we're all celebrating the 4th of July with summer fun events...cookouts, days at the lake, and for me that means....lots of reading.

For those of you that don't know, my original series is about a military-oriented family, the Robertson's. And on this weekend when we celebrate our freedoms, I thought it would be fun to put the Robertson's stories on a special bundle sale. 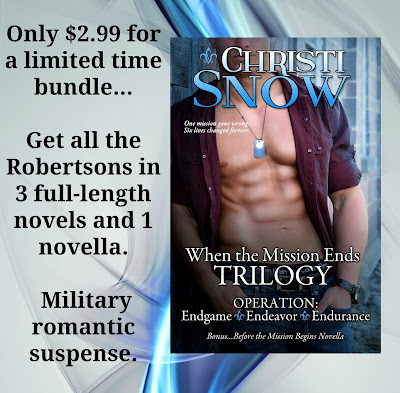 For this weekend, the price on this bundle will be
only $2.99

This is a special, limited-time release of the When the Mission Ends trilogy e-book bundle... (3 full-length books + 1 novella). 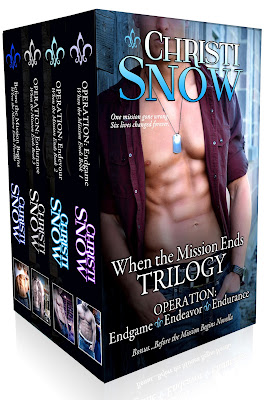 Series Overview:
The military has always been a way of life for the three Robertson siblings: older brother, Colton and twins, Chris and Cassie. Colton and Chris went into the Air Force as pilots and Cassie is a military history professor at Texas Tech University. But when Chris’s jet is shot down in a horrible mission gone wrong, it throws their entire world into disarray—affecting not only their lives, but also the lives of their friends.What happens after that mission ends and they have to find a new focus for living?
Operation: EndgameIt’s been six months.
Six months since Jake Madsen let Chris Robertson die.
Six months since the passion between Jake and Cassie, Chris’ sister, stepped over the line.
But now Cassie’s being stalked and it’s time for Jake to swallow his guilt, grief, and lust so he can save her life, even if it’s a life without him. He owes it to his dead friend and he owes it to Cassie. He’s fallen in love with her, but she doesn’t have to know that for him to keep her safe.
Operation: EndeavorColton Robertson left his career in the Air Force…
… to come home and help his family heal. Unfortunately, his reception was not quite what he’d hoped for and he ended up as roommate to hippy dippy yoga instructor Penelope Pruitt.
Penelope has spent her life under the restrictive thumb of her parents and she doesn’t want to do the same with the straight-laced, serious Colton. But when it becomes apparent that Penelope’s life is in danger, Colton won’t settle for anyone else protecting Penelope besides him.
Opposites attract and that’s definitely the case with Colton and Penelope. On the surface, they don’t have anything in common, but as the sparks fly and the danger ramps up, their passion is inevitable.
Operation: EnduranceThey had a single night of passion before he deployed on a risky mission.18 hours on a mission gone very wrong was all it took to shatter all their hopes and dreams.
The hero:He survived 6 months of captivity and torture, kept alive by dreams of her.
The heroine:She thought he was dead and moved on only to have her world fall apart once again.
Two people who have been hurt more than any two people should ever have to suffer. Can they find redemption and healing with each other or will another threat shatter what’s left of them?A tortured hero.A grieving heroine.A serial rapist who won’t give up.
Warning: This book features graphic sexual violence which some readers could find disturbing.
Before the Mission Begins (read between Op:Endeavor and Op:Endurance)Before his mission began, he went home. 24 hours to say goodbye to his twin sister.
Instead he found her. A girl that was nothing like the one he thought he knew.
They have 24 hours. 24 hours before he deploys on an extremely dangerous mission. 24 hours together in a freak West Texas snowstorm. 24 hours that will have to get them both through the awful next year.
When the resident good-girl decides to take on the visiting bad-boy, 24 hours is all it takes to change their lives forever.
This is the story of the 24 hours that no one knew ever occurred…until now. 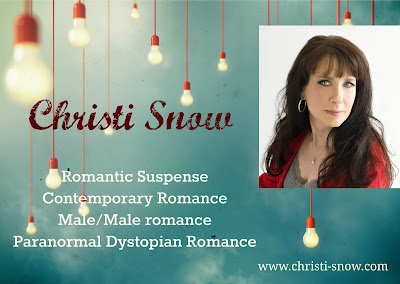 I hope everyone has a safe and happy holiday weekend.

Posted by Christi at 3:49 PM
Email ThisBlogThis!Share to TwitterShare to FacebookShare to Pinterest
Labels: Promo Post, When the Mission Ends