Tagline Tuesday: Through the Veil

The idea...I'll share a quick tagline from one of my books. It could be about the book, the series, or even about one of the characters. I plan to have fun with this throughout the year. Hopefully, you'll like the tiny glimpses into the story lines, too.
Today, I'm sharing the first tagline from my paranormal dystopian romance, Through the Veil. 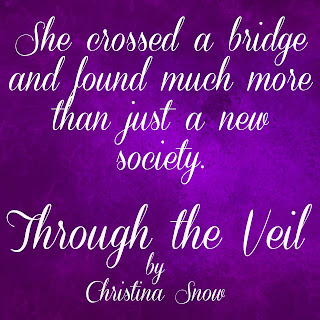 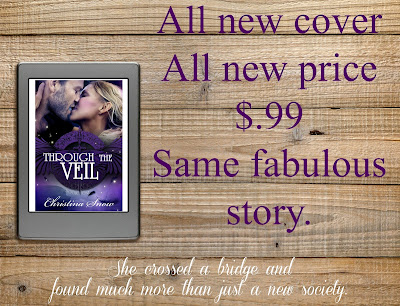 This book originally was released in Sept, 2014 to kick off an 8 book series. Since then I've been caught up writing other projects, so when it came time to write books #2 and #3 in the series, I decided a good cover overhaul was needed.

The book was re-released yesterday with the new cover (although some outlets are still showing the old cover...the new cover will be in the file). And the print won't be available until next week when I've had a chance to get the proof copy in and checked. And with the rerelease, I dropped the price on the e-book to $.99. It won't stay that price forever, so you probably should grab it while you can.

Story Overview:
58 years ago a gorge opened up from Mobile, AL to Quebec City, Canada to split the United States into the Western States (WS) and the Eastern States (ES).
40 years later a fog rolled in on the WS that they called the Veil. Within twelve hours it formed an impenetrable wall between the two sides.
It’s been 18 years since anyone has known what’s happening on the other side of the Veil.
Now, Lori, an Other, in a desperate attempt at escape from the ES’s torture and experimentation, has crossed the Veil and found a world beyond belief.
Marcus is a Warrior, but when Lori collapses at his feet wounded and exhausted, he knows he has to protect her. But seeing that she’s the first person he’s seen in 18 years without wings, he’s worried about what her appearance means for his people and the world they’ve created since the Veil fell.
Two new societies: one built on a respect for the natural order of nature and the world, the other built on mistrust and corruption. Can they learn to co-exist once again?
Amazon
Barnes & Noble
Kobo
iBooks
***

Books #2, Allied in Flight, and #3, Rejecting Destiny, will be released in March and April, so now is the time to grab book #1 at this awesome price.