Tia Matthews is the heroine in the story. She's one seriously tough girl. Three years ago, her entire family died in a plane crash, leaving her alone to run the family ranch. That's a lot of stress and pressure on her, so she's learned to channel those emotions through Mistress Tisiphone, her secret persona as a Domme for hire in an Austin BDSM club. In the good old boy ranching world of Texas, they have a hard time dealing with Tia, but if they found out about Mistress Tisiphone, they'd drive her out of business. These are the first lines about Tia in Broken Control...the start of Chapter 1. 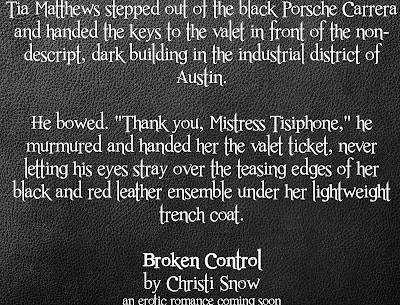 And just because I love y'all, here's the back cover blurb:

Cade Dillon came to the Bar M two months ago to work as Tia’s ranch foreman, but has other reasons for being there. His new boss is beautiful, but her icy demeanor has ensured he has no qualms about his real reasons for coming to work for her. But when her accident leaves Tia vulnerable with no one to turn to, Cade begins to see a new side of her—one he wants to get to know better. He doesn’t realize that discovery is going to lead to a new revelation about himself, too.

Posted by Christi at 8:50 AM
Email ThisBlogThis!Share to TwitterShare to FacebookShare to Pinterest
Labels: Broken Control, First Line Friday