For NaNoWriMo, this month is all about the Through the Veil series. I'm planning to write books #2 AND #3 this month. So for those of you that have been waiting for Griff's fate...he's coming and here's a tiny peek from his book, Allied in Flight.

The first line of the book... 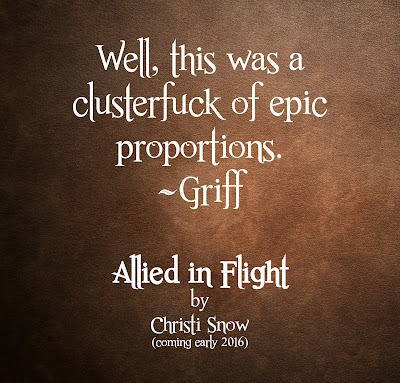 I don't have a cover to share for this book yet. (Keep watching this space though because I have some really fun announcements about that coming up.)

In the meantime, would you be interested in reading the back cover blurb???

He had to find Shar, a wounded hawk shifter. But in the ensuing chaos, he became a captive instead of a rescuer. Three days later he awakes in his own cage, alone. But during the nights, he’s not alone. An alluring redhead with a siren’s call visits his dreams, and his resistance is breaking down.

After three years in captivity, Shar has one goal...keep her and her sister alive. To do so means cooperating with the evil doctors who want her to seduce and manipulate Griff.  She likes and is drawn to the man with the strange chocolate wings, but she can’t let that attraction distract her. Savannah’s fate is in her hands.

The WS and the ES have been separate entities, but once the Veil was crossed, things began to evolve. It’s a new world, but that doesn’t mean things are going to get any easier in the near future.

*****
Kelly Apple and Amanda Shofner are playing along, so go check out what they've come up with this week...

Posted by Christi at 4:00 AM
Email ThisBlogThis!Share to TwitterShare to FacebookShare to Pinterest
Labels: Allied in Flight, First Line Friday, Through the Veil series