It's release day for WHEN LOVE SURPRISES.... 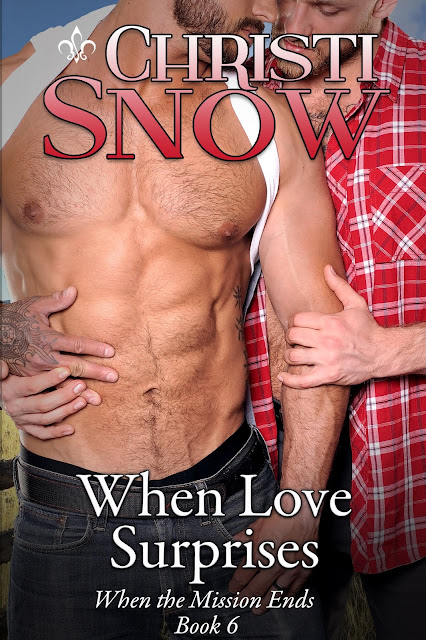 This is a standalone male/male romantic suspense novel, although it is part of the overall When the Mission Ends series.
Story Description
Raised in a religious household, being gay was never an option for Steven, but when an injury left him incapacitated, he was forced to face those urges that he’s been able to ignore for the last thirty-eight years of his life...
Lost...
Three months ago, Major Steven Hardesty’s life sat on the precipice of perfection. Now he’s trying to come back from a life-threatening injury and a devastating romantic loss all while trying to figure out what he’s going to do after separating from the Air Force.
Alone...
Billy Starr never planned on running his family ranch by himself. He was supposed to be doing it with his sister, Whitney. But when she died in a freak accident, it sent his life in a tailspin of despair and alcohol.
Healing...
Steven and Billy were friends. Billy offered the ranch as a good, private place where Steven could recover, but as their friendship deepened, so did other feelings. Is it possible that a love affair between the two of them could heal them both? Or break them even more?
Order Links...

Steven watched Billy’s ass as he followed him through the house. Sometime in the afternoon, Billy had showered and slipped into some old jeans that cupped his muscular butt in the most delicious way. How awesome would it be to watch those glutes flex when Billy was naked? Steven inwardly cursed himself.  That wasn’t resisting his attraction to Billy. He couldn’t allow his thoughts to even go there.
He didn’t divert his gaze fast enough, because Billy turned and caught him checking out his ass.
Steven winced. “Um, sorry,” he mumbled.
Billy just let loose with a good-natured laugh. “Hey, if you want to objectify me, I’m okay with that.”
Steven groaned. “But that’s the problem. It sends both of us the wrong signal. You’re a good friend, Billy. I don’t want to blow that.”
“Listen.” Billy turned and grabbed him gently by the shoulder. “We are good friends. We’re also guys. That means that we can separate sex from intimacy and feelings and shit. Come on. Come sit down. Get some pizza, and then, I have something I want to propose to you, keeping the separate feelings in mind.”
With that kind of lead-in, Steven didn’t think he’d actually be able to eat, but then he took a single bite of the melt-in-your-mouth-good pizza. Any nerves that had been building up dissipated with the desire to inhale the wonderful, decadent pizza.
Neither spoke until they’d each eaten three slices of pizza. Finally, Billy looked up from his plate and met Steven’s gaze intently.
Steven wiped his hands on his napkin, suddenly losing his interest in the pie. “You mentioned a proposal?” he asked past the lump in his throat.
“Yeah. I heard what you said yesterday, and as awful as that perspective is, I can understand and respect your point of view. But I think you’re selling yourself short. Correct me if I’m wrong, but you’re attracted to men, right?”
Steven nodded, his dick growing half-hard at the turn of the conversation. He had no idea where Billy was taking this, but his junk seemed to have an idea.
Billy laid both hands on the table. “And if I’m reading what you said correctly, you’ve never explored that attraction, right?”
Steven shook his head.
Billy lifted a hand. “Just hear what I have to say first, okay?”
Steven’s nodded a little more slowly this time.
“I’ll admit that as a gay man, the idea of you never having experienced the pleasure that can be found in a man’s body—with a man—physically hurts me. I get why you don’t want to go there, but I’m offering a way for you to experience sex safely. We’re out here in the middle of nowhere, completely alone. I’m proposing that you use me, enjoy me, explore me. Even if you never have sex with a man again, I want you to make the decision to forgo that option completely with knowledge and maybe a few memories to fuel your fantasies later in life.”
Oh, god, was Billy actually proposing that he’d be available for a pity-fuck? Steven inwardly cringed. His stomach churned with mortification and disgust...for himself, that he’d brought the two of them to this point.
Billy shook his head with a self-effacing chuckle. “I’m making this sound like it will be a sacrifice on my part, but that’s not at all how I’m looking at this idea. I’ve never planned on building a life like you want—finding a long-term partner for the rest of my life. As a result, I realize I’m going to spend most of my life alone.
“I’m thinking that this arrangement will work for me, too... It will provide some sweet memories for my spank bank to live on later in life. I’ll always be able to look back at those really hot-as-fuck weeks with my friend, Steven.” Billy gave him a wicked smile that heated Steven’s groin. “Because there is one thing that I’m sure of...the sex between us would be fucking hot.”
And just like that, Steven was fully hard. His chest felt tight, but that had very little to do with his injury and everything to do with the hot images of what Billy proposed barraging his brain.

Also...
There is more info about the two main characters as well as another exclusive excerpt from the book that you can find in this blog post...HERE.
Posted by Christi at 5:00 AM
Email ThisBlogThis!Share to TwitterShare to FacebookShare to Pinterest
Labels: New Release, News, When Love Surprises, When the Mission Ends