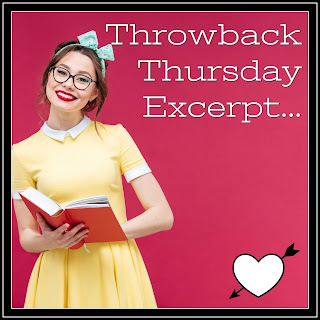 The following excerpt was from Operation Endurance, the third book in the original When the Mission Ends trilogy that ended the Robertson family part of the saga. I knew from the very start that Chris had a difficult story, but I didn't realize until I started writing it just how messed up Julie was, too.

Hands down, Operation Endurance was the hardest book I've ever written. I literally sobbed all the way through writing it. Both Chris and Julie were just so broken...but it made their HEA all that much sweeter. There have never been two characters more deserving of a happily ever after. I love them still.
I may have to see if I can find some time over the next few months to revisit them...and all the Robertsons, just so we can catch up with where they're at now.
Excerpt:


When he got back, Colton was standing there knocking again. “Her car’s still here.”
Chris tried to get her key in the lock, but his hands were still too shaky from the night before. Colton took the key out of his hand. “I got it.” He quickly disengaged all the locks, but when he went to open the door, the chain was still holding the door closed.
“Julie,” Chris called through the gap, but she didn’t respond.
The brothers exchanged worried glances. “We have to get in there. She’s been really sick, Colton.”
Colton stepped back and examined the door. “Okay, I think I can kick it in. Let me get some shoes on first though.” He ran back into Chris’s house while Chris leaned his head against the door, trying to see anything inside her house. He couldn’t see her. Why wasn’t she answering the door? With the chain engaged, she had to be in there, but the idea that she was too sick to even get to the door sent a chill of fear down Chris’s spine. She had to be okay.
Suddenly, Colton tugged on his shoulder. “Stand back, so I can do this.” It took two kicks, but finally the wood on the door jamb splintered and Chris rushed into her house.
Swinging his head to spot her, he frantically searched through her rooms, heading toward her bedroom. His heart skipped a beat when he spotted her bare legs on the floor on the other side of her bed. She was crumpled on the floor like she’d simply collapsed. He slid to her side, feeling for a pulse. It was there, but so weak. Her skin was flaming hot, but dry to the touch. Without even checking he could hear her breath rattling in her lungs.
“Colton,” he yelled back toward the living room, “I found her. Go grab the keys to my truck. We have to get her to the emergency room.”
“I’m on it,” Colton called as he ran back out of the house.
Chris leaned down over Julie. “Julie, Butterfly, can you hear me? We’re gonna take you to the ER.” He gingerly reached under her and picked her up, but there wasn’t any sign of consciousness from her at all. His own pulse pounded in his ears as panic threatened to overwhelm him. She had to be okay. He pulled her tightly to his chest willing her to be okay.
He strode out the front door and Colton was there with a handful of wallets, keys, and shoes.
Colton’s eyes darted to Julie’s pale still form in Chris’s arms before he ran in front of Chris to open the passenger door of the truck for him.
As Chris settled into the truck seat, he studied her translucent skin. She had a grey cast to her pallor, which scared him to death. Cradled in his arms, she felt and looked way too fragile to him. He brushed her hair off her forehead and brushed a kiss across it. She was so damn hot. Her fever was way too high.
Colton started the truck, but they weren’t moving fast enough. “Hurry, Colt.”
“I know, but it won’t do her any good if we get in a wreck on the way.”


Chris pulled her to his chest. This may be the last time he got to hold her like this. Panic surged through him. “Hang on, Butterfly. Just hang on. We’re gonna be there soon. You just have to hang on. You can’t leave me. I need you. Please, hang on, Julie.” 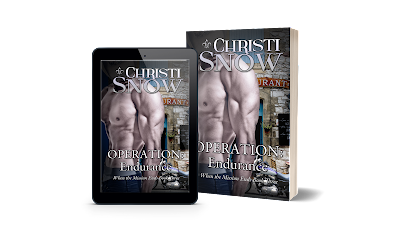 She thought he was dead and moved on only to have her world fall apart once again.
Two people who have been hurt more than any two people should ever have to suffer. Can they find redemption and healing with each other or will another threat shatter what’s left of them?
A tortured hero.
A grieving heroine.
A serial rapist who won’t give up.

Warning: This book features graphic sexual violence which some readers could find disturbing.

Amazon
Barnes & Noble
Kobo
Posted by Christi at 5:00 AM
Email ThisBlogThis!Share to TwitterShare to FacebookShare to Pinterest
Labels: excerpt, Operation: Endurance, TBT, When the Mission Ends