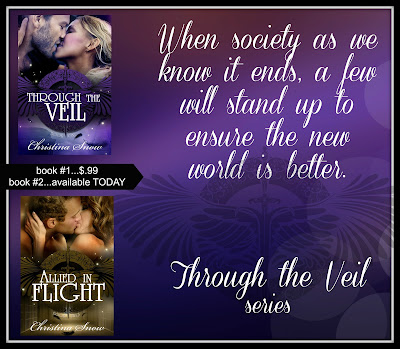 The Through the Veil series is a dystopian paranormal world. Although it's dystopian, the world overall is not that much different from ours...at least on the Eastern States side which is where this second book in the series, Allied in Flight, takes place. The ES is filled with cities much like we see today. Very little has changed about everyday people's day to day lives.

Veil:
58 years ago, a gorge from Mobile, Alabama to Quebec City, Canada split the country. It was a quarter of a mile wide and a mile deep. At the time, it appeared to be just an interesting geological phenomenon. In fact, it became quite a tourist destination. But 18 years ago, a fog rolled in on the Western side of the gorge. They called it the Veil. Within 12 hours, it had created an impassible wall right down the center. Within hours after that, all the adults (and a lot of the children, too) were dead, their bodies...just gone.

Since then, no one has been able to cross from one side to the other...until Lori, an Other with an ability to manipulate energy using the earth’s forces, breached the Veil as she fled from the ES and escaped into the WS (book #1).

On this side, the government somehow had warning that something was coming and managed to hide and keep their key government and military officials from being affected. Those people began to reappear two months after the Veil fell to reestablish order, but the new world society became a police state with extreme rule and military force.

In the ES, a few people developed gifts. Those gifts ranged from telepathy to animal shifting to teleporting. In this society, the gifted people were called Others and have been reviled by the government as something to be feared and condemned. The government gathered up the Others and imprisoned them in labs for testing. Most of the Others have died.

On this side, there were only children left to make their way in the world. The oldest survivor was Bethany Harris. She took control by default and is now the leader of the WS society which functions on a much more environmental and earth friendly doctrine.

Everyone in the WS evolved...they all developed telepathy and wings. A few of them have other gifts as well...such as healing, communication with animals, and manipulating matter. 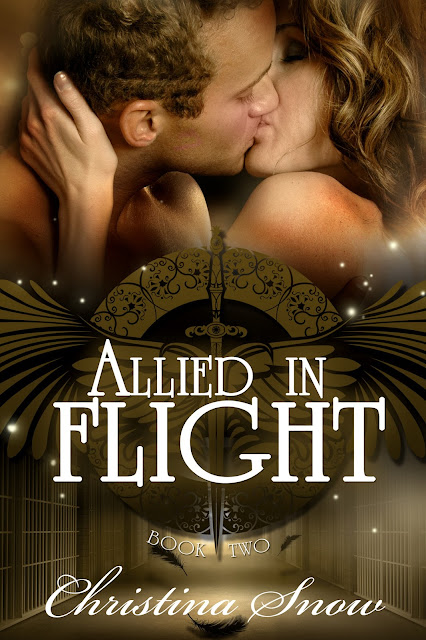 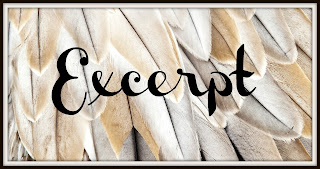 (note: part of the evolution of humans after the Veil falling was that they developed varying telepathic abilities. Griff & Shar have a stronger connection than most.)


Exhausted, Shar lay down on the bottom of her cage. Using that much mental energy for so long left her completely drained when she was well, but after her injuries and the attack, she was done...both mentally and physically. She simply didn’t have anything left, so she let sleep overtake her.
Posted by Christi at 3:00 AM
Email ThisBlogThis!Share to TwitterShare to FacebookShare to Pinterest
Labels: Allied in Flight, New Release, Through the Veil series