Where THROUGH THE VEIL came from...

I posted this blog post earlier in the week on my book review blog (because this blog wasn't working).
But my awesome PA fixed this one now, so I'm reposting this here.

Where did THROUGH THE VEIL come from?

I don't know if you've heard, but I have a new book coming out this week and it's not my normal type of book...

Paranormal Dystopian Romantic Suspense…Through the Veil is NOT my normal genre. So many of you may ask…where exactly did it come from?

There’s a story there…

Through the Veil may be my 9th release, but it was actually started way, way early in my writing career…right after I finished Operation: Endgame.  (my first release)

The story began as a 30 minute writing prompt in my local writing group. That prompt was “crossing a bridge” and we were given 30 minutes to get a scene on the page. For the most part, besides fixing the technical aspects of the writing, the basic framework of that scene is still completely intact in the book as it is now. 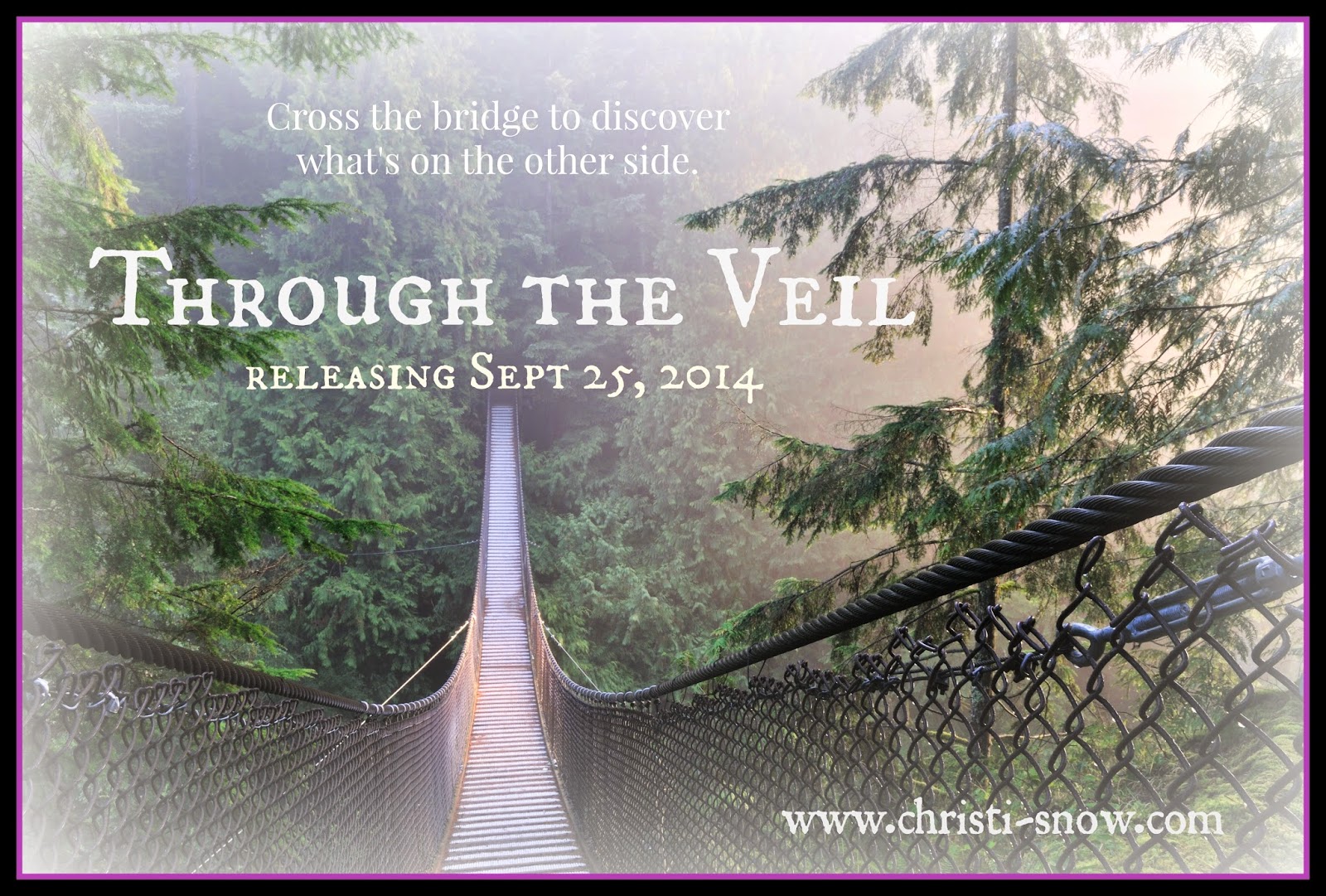 Here’s that scene…
Crouched behind the
rock, gasping for air, Lori surveyed the decrepit bridge below swinging eerily
over the deep gorge. Measured at a mile deep, the quarter-mile wide gorge was
edged by stone cliffs with even more treacherous looking rocks jutting out from
the bottom of it. Would that old, worn out, rickety structure support her? No
one had been able to use it for eighteen years.
Pressing the bullet
wound at her side to stem the flow of blood, she glanced behind her, trying to
ignore the pain that sizzled along every nerve ending. She hadn’t heard her
pursuers for several hours, but that didn’t mean they weren’t nearby.
A bead of sweat rolled
down her spine as she glanced at the bridge again. It had been built decades
ago, a few years after the gorge had suddenly appeared. And, damn, that gorge
looked scarily deep right now.
The only reason Lori
even knew about this bridge was because her family came here for vacation a year
before the Veil appeared. The riskiness of climbing this bridge so far above
the ground became the highlight of her trip back then. She’d been nine years
old at the time and it remained as one of her best memories of time with her
family, a family that disappeared from existence ten months later.
Now this bridge
featured as both her nightmare and salvation. If she stayed on this side of the
gorge, the men after her would kill her—or worse, imprison her again. She’d rather
die than spend any more time as a lab rat. And with the blood oozing from her
side, that remained a very good possibility. Survival meant she could come back
and help the Others escape, too.
Gritting her teeth,
Lori stood and crept down the hill. The closer she got the more flimsy the
bridge appeared. It was simply a foot bridge made of wood and rope, suspended
across the gorge. The irony of the situation didn’t pass by her. They only
wanted her for her gift. She counted on her ability to manipulate space to save
her life now.
But she had to
escape. If that meant using every last drop of energy she had, she would.
She let go of her
side and sucked in a breath to focus her concentration. Grasping the rough
ropes, she took her first step onto the bridge. It shifted slightly under her
weight with a creaking sound which reverberated through the quiet of the
surrounding forest. It was as if nature held its breath to see if she would
survive this. The swaying bridge took more effort from the muscles of her core.
She hissed at the added pain and fought off the black spots encroaching on her
vision.
Glancing behind her,
she didn’t see any movement except the leaves rustling on the trees. Looking
forward again, she tried to peer through the Veil to the other side. She had
about fifty feet of bridge before she hit the wall of fog. Slowly, she edged
her feet across the rough wood, stepping gingerly to avoid falling through the
rotted boards. The farther out she crept, the more the bridge swayed over the
huge expanse. She couldn’t look down. Her breath came out in gasps as she inched
across.
Finally, she reached
the Veil. She reached forward with a hand, and could feel the semi-transparent
barrier like a huge wall in front of her. She closed her eyes and gave a silent
prayer this would work.
“She’s on the
bridge!”
Lori swung around. Men
in camouflage holding guns poured out of the forest behind her. Damn. This was
her final chance. She closed her eyes and faced the Veil again. Using every
ounce of energy she could pour into it, she focused on creating a hole big
enough she could climb through it. Finally, the energy moved and the wall
shifted. She scrambled through the invisible hole she created.
Once through, she
let go of the energy to seal the wall back up and not a moment too soon, as the
energy reverberated under the hail of bullets striking it. But she couldn’t see
or hear the men on the other side anymore. The fog had enveloped her. She held onto
the rope supports and felt her way across the rest of the bridge on wobbly
knees.
She’d made it
through. Falling wasn’t an option now.
When the solid
ground of the other side met her feet, she collapsed in exhaustion and relief.
She lay there gasping and trying to find energy to stand. Manipulating the Veil
had taken everything she had. The darkness was slipping over her consciousness
when strong arms lifted her up.
The fog still surrounded
them, but that didn’t keep her from seeing the gorgeous, scowling, concerned face
of the man holding her against his naked chest or the dark purple wings at his
back.

About two months after I wrote that scene I took a fast-writing workshop and wrote 35,000 words in 7 days that centered on that original scene. I did that without any sort of plotting or planning whatsoever…not the way I normally write.

Through the Veil is now around 76,000 words and it took me over two years to straighten out the hot mess that I began with. I never doubted the story, but this is a whole new world filled with winged Warriors, tortured/talented Others, and two whole new civilizations. And it’s the start of an 8-book series. So there was a lot that I had to sort out. I think I’ve done that now and am thrilled that Through the Veil is releasing NEXT WEEK! I honestly wondered if this day would ever come…LOL! 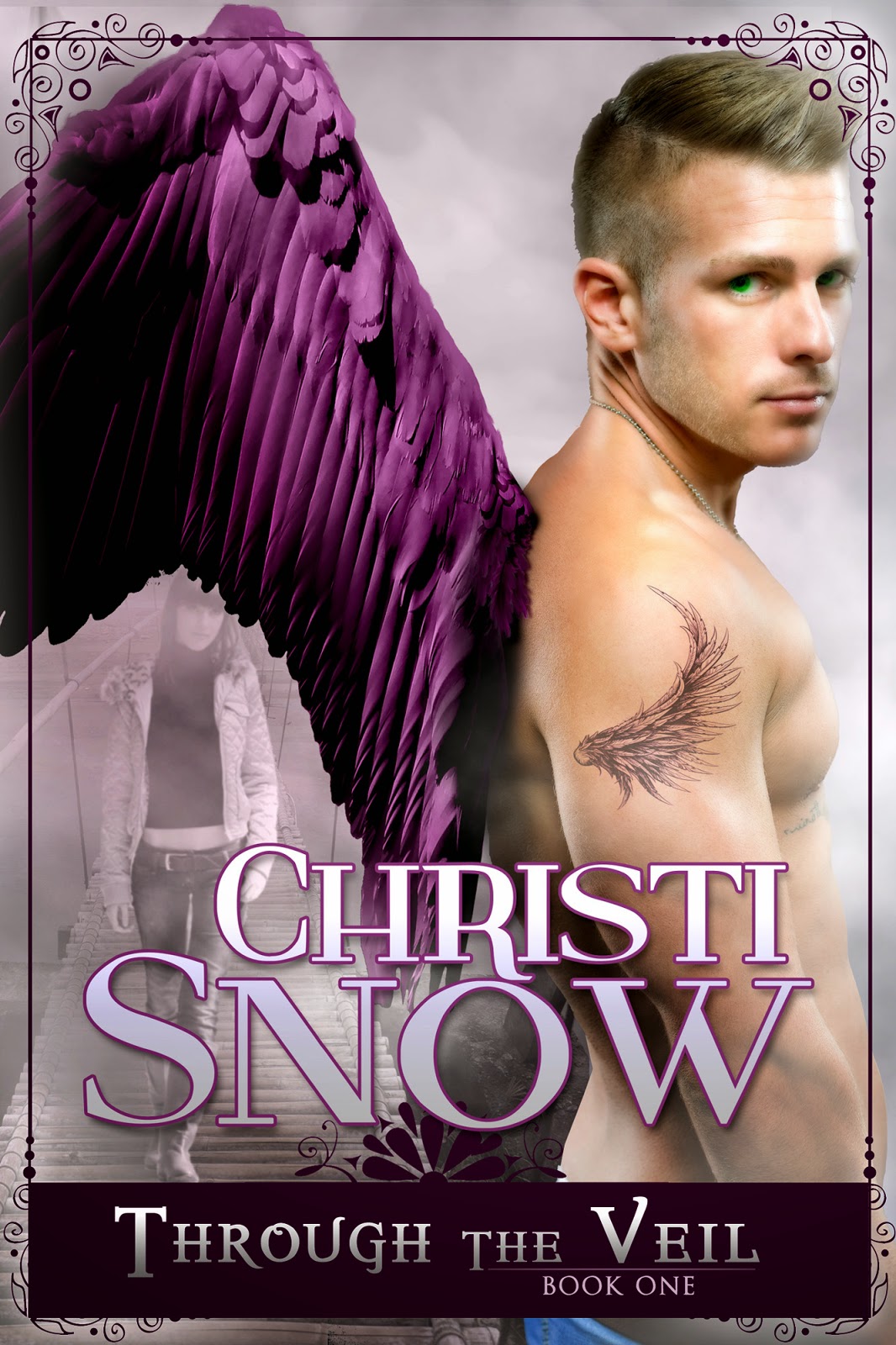 Through the Veil Story Description:
58 years ago
a gorge opened up from Mobile, AL to Quebec City, Canada to split the United
States into the Western States (WS) and the Eastern States (ES).

Posted by Christi at 5:03 PM
Email ThisBlogThis!Share to TwitterShare to FacebookShare to Pinterest
Labels: blog, Through the Veil