Found At the Jazz Club is OUT NOW! 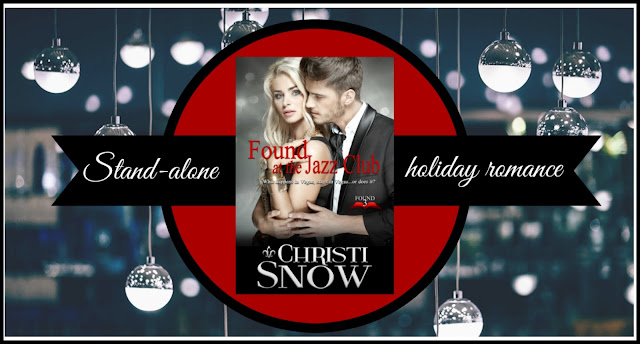 What happens in Vegas stays in Vegas...or does it?


Emily Hodges went to Vegas for her best friend’s wedding. She was NOT looking for a husband. Been there, done that, never doing it again. She has enough scars on her heart, and doesn’t need or want any more.

Brady Gresham went to Vegas to find his musical voice again. Instead he found an inspiring muse in the form of Emily. But right now his musical career is his focus. He’s too young to want or need to be tied down.

Somehow their drunken get-together turned into a wedding that neither one of them can remember or explain.

Waking up married was never part of the plan, but you know what they say about best laid plans...

Goodreads
Amazon
All other retailers 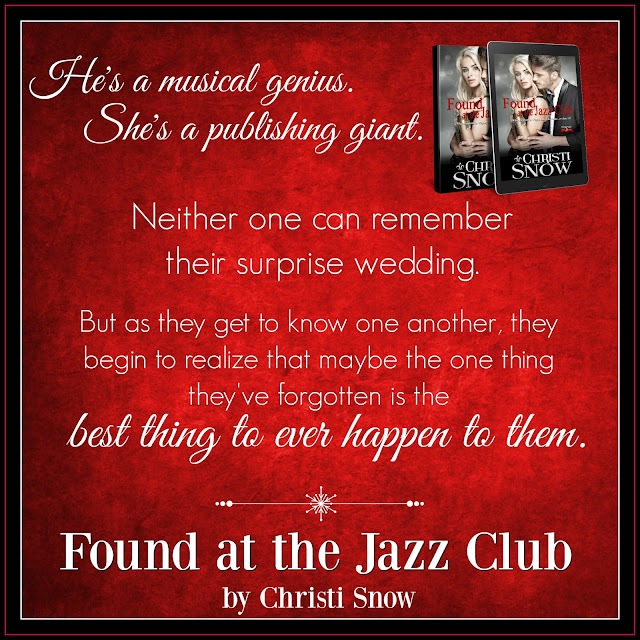 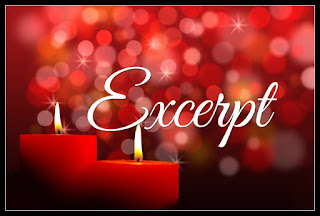 Emily Hodges awoke pretty sure something rancid had died in her mouth. She rolled over with a low moan as the orchestra made up mainly of bass drums began a symphony in her head.

Slowly, she opened her eyes and squeezed them shut again when the bright sun blinded her. How much had they drunk last night? Was Brady as bad off as her?

She glanced across the bed that had been left in shambles. Well, obviously they hadn’t been that drunk if they’d managed to have sex. She smiled. Sex with Brady was one of the best perks of this trip to Las Vegas. She’d forgotten what really good sex felt like. Her core clenched in memory, giving her a roll of delicious soreness that spoke of a very good time last night even if she couldn’t quite remember it.

She needed water, aspirin, and then Brady. Maybe she could convince him to have one more round before she had to catch her flight back to Denver. Slowly, she threw her naked legs over the side of the bed, dragging the sheet with her. Her head swam with being upright, so she breathed through her mouth, waiting for the rush of nausea to pass.

A water bottle, a packet of aspirin, and a note sat on the nightstand. She smiled despite realizing there probably wouldn’t be a second round. Brady had already left.

She picked up the note and read.

Hey, gorgeous.
Do you know how hard it is to leave this bed when you look so fantastic and tempting in it? We won’t talk about the pounding in my head that wants to convince me that I should stay in bed, too. But work calls.
Thank you for a fucking fantastic weekend...and for the fucking fantastic fucking. You were incredible.
Now, take the pills, because I have a feeling your head hurts just as much as mine does. Hopefully, you can remember more of the night than I can, but from the looks of things—ahem...I cleaned up all the trash—I think we had a good time.
...Brady

A glance at the alarm clock told her she still had a couple of hours before she had to be at the airport for their chartered flight home. She could shower, and she’d head back to her hotel.

She squinted around the strange hotel room...well, it actually looked more like a luxury suite. Why would they have stayed here rather than her suite that she’d already paid for? Or they could have gone back to Brady’s borrowed apartment. Weird, but they’d been drunk. There was no telling what they’d been thinking.

She shrugged, grabbed the bottle and took the pills, and made it to the luxury, spa-like bathroom. She glanced in the trashcan and was impressed at the number of condom wrappers. They’d been energetic, even drunk. She gave a small giggle and then glanced at herself in the mirror.

Whoa. Thank goodness, Brady had already left. If he’d seen this version of her, he’d have been running. Hot mess didn’t even begin to cover it. Her hair that had been in an updo leftover from Mac’s wedding was a huge rat’s nest, half a teased up, tangled mess and half falling over her face. Her mascara had made it almost to her chin. She grabbed a washcloth, wet it, and started scrubbing at the—

She froze, staring at her hand in the mirror as shock and ice-cold fear zinged straight from her stomach to her feet. Why the hell did she have a diamond ring on her left hand?

She stared, hoping it would disappear. It had to be a trick of the reflection on the mirror. That couldn’t really be there. But she was terrified to look down at her real hand. Her hands started trembling, her stomach roiled, and her legs suddenly felt way weaker than they had moments before.

She had to do this before she collapsed.

She glanced down at her hand and dove for the toilet as reality set in. She had a wedding ring on her hand. 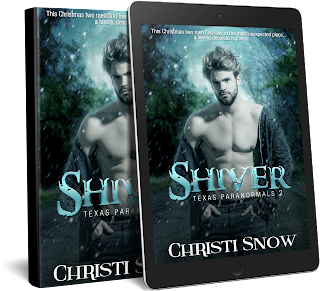 And guess what?
The releases for 2017 aren't ending yet!
Next week... Shiver, an m/m paranormal novella featuring a deer shifter and a guy who really didn't need to wreck his truck meet in the most epic way possible.
Coming December 8, 2017
Goodreads
Amazon
All other retailers
Posted by Christi at 5:00 AM
Email ThisBlogThis!Share to TwitterShare to FacebookShare to Pinterest
Labels: Found at the Jazz Club, New Release, News